the fact that I still don't know what it means to be genderqueer, What Is It Like to Be Non-Binary? I’m Still Finding Out., Help! I Think I Might Be Non-Binary, But How Can I Know?, How to Know If You’re Non-Binary, transgender teen survival guide non-binary flowchart, 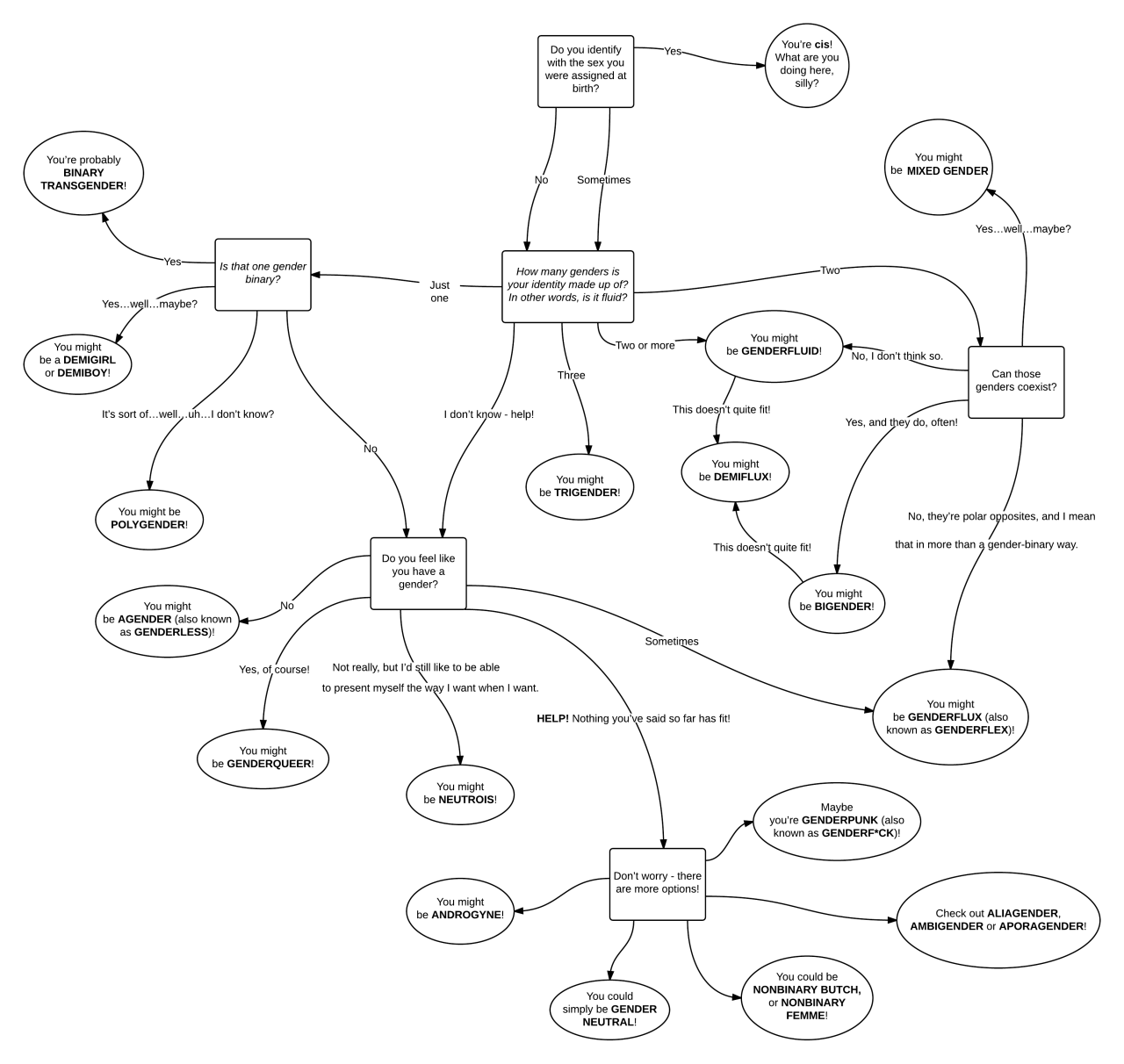 The Ethical Slut, How a hackneyed romantic ideal is used to stigmatise polyamory, TRIGGER WARNING The Self-crucifixion of the Persecuted Polyamorist, Chastity Belt – Seattle Party

♫ If you dance if you dance No girl will give you a chance You're a cool guy ♫,

What's the Difference Between Non-Binary, Genderqueer, and Gender-Nonconforming?, Beyond Androgyny: Nonbinary Teenage Fashion, 100 Ways to Make the World Better for Non-Binary People, The Gender Spectrum Collection: Stock Photos Beyond the Binary, Heterosexuality and its discontents, Heterosexuality Without Women, the fact that self-love isn't an antidote to anxiety, the fact that self-love isn't inherently navel-gazing, the fact that 'self-love' can be a barrier to self critique, self-love as spiritual bypassing, self-love as spiritual growth, the fact that self-love repositions the ego in social justice work, the fact that I am not the fix nor the problem, the fact that I can be a part of the fix or the problem, and the problem, the fact that I am the center of the world, self worth and independence vs. feeling grounded / connected / lost / aimless, changing relationships, the triangular theory of love, polyamory, intimacy, commitment, romantic attraction, passionate love, companionate love, intimacy, commitment, investment, New Relationship Energy, honeymoon stage, compersion, jealousy, dependency vs. emotional support, codependency, the fact that I can be really independent and still find being in a relationship really gratifying because it activates certain parts of me that are always there but that I need to be reminded of, the fact that being with someone else can make me feel like those parts of me are more possible to access, the fact that a partner can give my personhood a context, the fact that my personhood exists without them but that it can feel like it exists floating in space, in a vacuum, especially in this world, that this can feel positive and negative, disorienting and liberating, ♫ “Everyday” ♫ by Weyes Blood, ♫ “Movies” ♫ by Weyes Blood, ♫ “Andromeda” ♫ by Weyes Blood, disorientation, the fact that fighting with someone makes you feel closer, the fact that toxicity can create attachment and meaning, the fact that this incredibly fucked up, post-grad disorientation, daily structure of life, checking your phone for a message, choosing to be in a relationship despite abuse creates an illusion of meaning, the fact that you may have convinced yourself the relationship is worth abuse and therefore must be a really important and meaningful relationship, 'healthy' relationships, A Happy-ish Marriage, filling the post grad void with codependency, the fact that the path of least resistance can be excruciating, mid life crisis, white picket fence, marriage, suburbia, figuring out what i want in life, independence, what is my life going to look like, codependence as a regression of independence, the fact that my friend klara wrote an article with accompanying chart titled “Unmascing Pt. I: The Comprehensive Vassar Boys Chart”,

amab, afab, Boys & Sex by Peggy Orenstein, Can Masculinity Be Redeemed?, incessant self-critique, spiritual bypassing, talk the talk, genderqueerness as an attempt to erase gender differences, colorblindness, genderqueerness as a liberatory project, I am a citizen of the universe, the fact that im curious: can you feel sorry without feeling bad? regret without negative affect, is that possible? the fact that if no, then is the desire for an apology an expressed need for someone to feel bad, punishment, carceral thinking, the fact that my friend Bett Williams wrote, “feeling bad about yourself is an ego trip and a waste of time,” the fact that non-binary thinking allows for space of exploring people's identity beyond gender, the fact that so consistently i've felt that gender has been a totalizing lense, the fact that i don't want to underemphasize or ignore gender, but rather have felt that gendered lenses can result in a lack of holding interpersonal realities of aggression, and reduced people's responsibility of developing self-awareness and communication skills, conflict resolution, the fact that gendered lenses can be an easy way out, dumping things on gender, the fact that on the one hand hand i see myself as “queer-lite” and don't want to take up too much space in queer spaces, the fact that on the other hand i remove my earrings (usually dangly) when i stop at gas stations outside of urban areas and want to validate my queerness so at the very least i can be aware of it and its implications for my physical safety and emotional wellbeing, am I queer enough, gatekeeping, the fact that my friend/co-worker Mel had a very inclusive definition of queerness which was “questioning and exploring sexualiy and/or gender,” the fact that I've had a really masc cis straight friend question whether or not I thought i appropriated queerness (particularly in fashion or sometimes speech), the fact that i've also had a really queer lesbian friend tell me I'm not queer but rather “non-normative/deviant sexuality and gender,” the fact that sometimes I think masc person having sex with femme people = not queer, the fact that this is very binary thinking though, is there a queer aesthetic? can it be appropriated, the fact that my cis friend (not really friend) was really judgmental of me wearing a crop-top, the fact that i'm not sure what is appropriation vs. gender expression, queer-lite, the fact that i've had sex with non-binary people and by not identifying as queer that can also be considered an affront to their identities, relinquishing the patriarchy